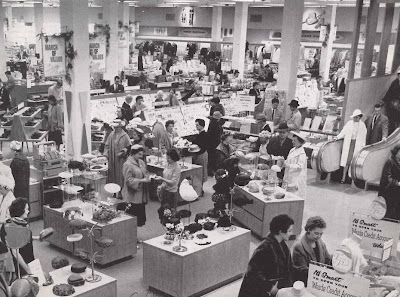 Family Shopping at a Department Store

There were three interesting things going on in Cleveland in 1969: the Cuyahoga River caught fire for the second time, there were riots on the East side, and I was entering kindergarten. Being a chubby little kid of four (going on five!) I was oblivious to much of the world. I wouldn’t understand for a long time what it meant that my neighbor the cop took a stray bullet in the spine during those riots and was confined to a wheelchair, or that my other neighbor suffered muscular sclerosis and also was confined to a wheelchair. What I did know was that my older brothers were sent off to school every morning, and I had my mother to myself for several precious hours each day. That’s what made life grand, and one of the grandest things we did together were her shopping excursions.

I like to think that my mother took me shopping with her because she enjoyed my company but, in retrospect, and knowing what I know now about small children and taking them out in public, she probably took me along because she had nothing else to do with me.

On one occasion, we were accompanied by her mother-in-law, my grandmother, who was as tough as she was beautiful, and, having been raised in the cold and forbidding northern Minnesota, didn’t suffer fools. So the real question was why would she agree to a shopping trip that included me, the silly, chubby, cry-baby of the family?

I don’t recall what they were looking for, but I know we were in the ladies wear department of one of the big department stores downtown. I was no more than four and the racks of clothes seemed spaciously separated, and to my young mind it was an amazing world to explore and conquer. Although victory for me at that time was to get through the day without soiling my pants.

I explored the maze of clothes racks, moving away from them but then hurrying back to make sure they had not abandoned me, shopping for girdles and support hose while I remained among the dresses and skirts. They were both, however, aware of me and noticed me when I returned, and called my name when I wandered away.

I tested their awareness of me by hiding from them, lingering at the end of the rack or one row away to see how long it would take for them to notice I was not present. This became for me an exciting version of hide and seek, and rather than just wait, I exploited my short stature by ducking low to watch their feet, and avoided them for longer and longer periods.

As their shopping involved them more and more, building up to their final choices, I could sense their impatience with my game. One of the racks, I noticed, had a shelf at the bottom. It was there either for hidden storage, or additional support, but the dresses hanging from its rod provided cover, and by climbing on the shelf I was concealed.

My mother and grandmother moved off a bit and within three seconds of losing sight of their ankles I started to panic. If their ankles were gone, then they must be gone. And if they were gone, would they ever come back? Had my silly game finally convinced them that I had gone somewhere else?

I could stand it no more and decided to reveal myself. But as I emerged from the clothes rack, a woman was walking quickly down the aisle toward me. I hesitated, but every moment seemed like a an eternity between me and my mother, and to wait for this woman to walk past was to risk never seeing my mother again.

I crawled out from under the clothes rack and directly into the woman’s path, tripping her. She fell on top of me and I burst into tears, more out of fear than any pain she might have inflicted.

My mother and grandmother were there in about two seconds as, of course, they had been just a few feet away. My grandmother berated the woman for being so thoughtless and clumsy to have fallen on an innocent and sweet child like myself.

That poor woman, a clerk at the store it turned out, apologized as much as she could, but my grandmother cut her no slack. My grandmother called her a clumsy oaf even as this woman offered us care in the store’s break room.

In spite of crying, there was nothing wrong with me. My older brothers inflicted far more abuse on a daily basis, which is how I learned to cry so loud and convincingly, but I had nothing more than a rug burn. Looking back, I think the store clerk probably fractured her wrist a tore a meniscus, but it was my boo-boo that garnered all the attention.

Once we were home, and I heard my mother and grandmother telling the story, I realized that they had no idea I had tripped the clerk, and, more importantly, I realized that confessing at that point would have gotten me a spanking. But now I can freely tell the truth.